The following tables show the grade distributions of Douglas County High School students on IB Exams, by percent, compared with the Global norms. A score of 4 is considered passing; HL exams are more rigorous than SL exams.

Students earn the IB Diploma by scoring a minimum of 24 points on 6 exams. To qualify, 12 of these points must be from HL exams. Students can be disqualified automatically by failing the Extended Essay (a 4,000 word research paper) or Theory of Knowledge assessments (an essay and oral presentation). 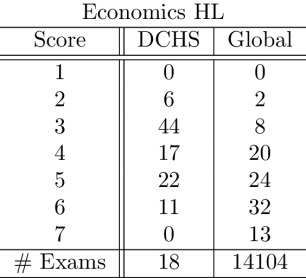 Economics is an IB elective (called “6th subject”), so not all students take the class. The other electives, as of the 15-16 school year, are Visual Arts or a second foreign language. 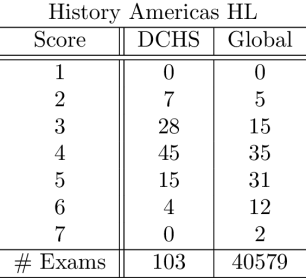 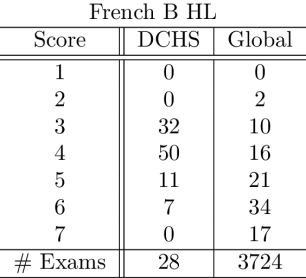 Notice there are many more foreign language exams taken than in other subjects. This is because all juniors take an SL exam and there are always more juniors than seniors due to students dropping out of the IB program. 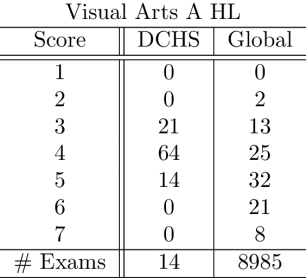 The Visual Arts exam is not a traditional “paper and pencil” test. Instead, students submit original artwork for evaluation.

The IB Diploma rate at Douglas County High School for the 2016 class was 64% (compare to 79% globally) while the passing rate on all exams (defined as a score of 4 or higher) was 72% (compared with 81% globally).

An alarmingly low number of students are scoring at the highest levels (6 and 7s). Only in Chemistry, Spanish and French SL are the percentages of 6s and 7s in the ballpark of global norms. By contrast, in eight exams less than 10% of students scored at these levels. This result suggests that few students are truly excelling in the IB curriculum relative to their global peers.

What is true excellence and why is it something that needs advocating for?

Since public schools are charged with helping us educate our children, using public resources, the community should expect full transparency for academic results and spending.

To elevate the quality of schools, the school system must be accountable to the local community. Here is how you, as a citizen, can help us do this.